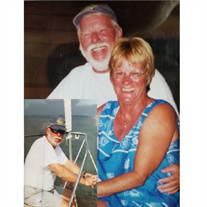 William Michael Schmidt “Bill” Bill was born March 20, 1943 in St. Louis, MO to the late Frank and Geraldine Schmidt. He passed away at SLU hospital on Sunday, April 18, 2021 with his wife by his side at the age of 78 years. Bill grew up in St. Louis until 1955 when his family moved out to Eureka, Missouri, where he spent his days playing on the Big River. In 1963 he married his one and only Sharon Mary Weggenmann. They moved to House Springs, Missouri, where his wife and him built their life long home and raised their three children; William, Robert and Kelly Schmidt. Bill graduated from Northwest High School in 1961, then became a sheet metal worker and a proud member of Union Local 36 for 40 years. He spent his free time bowling, scuba diving, watching football or baseball, playing cards with friends, sailing and telling jokes. He led his son’s boy scouts as troop master for 5 years. During his scuba diving days at Stockton Lake and Table Rock Lake he won many underwater photography awards. Besides his family his biggest passion was sailing, he built and sailed for many years on an 18ft sailboat, then expanding to a 26ft sailboat “Puff the Magic Dragon”. Their favorite place to sail was Carlyle Lake, he loved to sail with other members and friends of the Carlyle Sailboat Yacht Club. Not only did they spend most weekends there making memories with sailing parties and playing games, Bill served two Commodore terms for the Yacht Club. He was always up for a good time and loved to laugh with a good joke, he will be forever remembered by his many friends and family. Bill left behind his wife of 58 years, Sharon Schmidt (Weggenmann), Children William, Robert & Kelly, grandchildren Britainy (Carriles), Paden (Schmidt), Zane (Schmidt), Amelia (Schmidt), Eli (Schmidt), Casey (Hays), Alexandra (Hays) & Kristin (Hays). Visitation will be held on Saturday, April 24, 2021 from 11:00 a.m. until time of service at 2:00 p.m. at CHAPEL HILL MORTUARY 6300 Hwy 30 Cedar Hill, Missouri 63016. Interment to follow at Chapel Hill Memorial Gardens, Cedar Hill, Missouri. Family and friends can review and share stories, photos and condolences online at www.stlfuneral.com and follow details of this event and others in the community at www.facebook.com/stlchapelhill.

The family of William "Bill" Michael Schmidt created this Life Tributes page to make it easy to share your memories.

Send flowers to the Schmidt family.