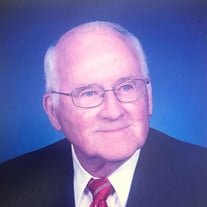 William “Bill” R. Hoskins of Saint Louis, Missouri was born July 5, 1929 in Huron, South Dakota, to Everett and Freida (nee Anderson) Hoskins. He peacefully entered into rest on Monday, June 7, 2021 in Kirkwood, Missouri at the age of 91. Bill is preceded in death by his parents, his wife, Virginia (nee Mills), and his daughter, Karen Hoskins. He is survived by three sons: Kent (Kay) Hoskins, Ronald (Susan) Hoskins, Bruce (Pam) Hoskins, daughter, Janet (David) Duwe, and sister Betty Sorkin. Bill adored his seven grandchildren: Lindsey (Damian) Hoskins, Ryan Hoskins, Paul (Alex) Hoskins, Jessica (Ben) Sutton, Taylor (Nick) Bazzoni, Cole Hoskins, and William Duwe, as well as, four great-grandchildren: Ruby, Veda, Calvin, and Thea. Bill is a graduate of the South Dakota School of Mines & Technology with a Bachelor of Science degree in Mechanical Engineering and went on to have a very successful career working for prominent companies including DuPont, 3M Company, Apache Container Corporation, and retired from Anheuser-Busch Companies. During his employment with 3M, Bill invented Scotch-Brite. He started his own company Apache Container where he developed the 2-piece aluminum can. Anheuser-Busch bought his company to form Metal Container Corporation which grew to become the largest can manufacturer in the world! Education was a high priority for Bill and he developed a scholarship in his name at the South Dakota School of Mines & Technology, providing tuition support for engineering students who otherwise might not have the opportunity to attend. He was an avid reader and enjoyed fishing, golf, and hunting in his younger years. Most of all, Bill cherished his family and loved spending quality time with all of them. A memorial service for the immediate family will be held on Friday, June 18th at Chapel Hill Mortuary at Oak Hill Cemetery where Bill will be interred beside his wife. The family has requested instead of flowers, donations may be made in the name of Bill Hoskins to the American Heart Association or to a charity of your choice.

Customized sympathy cards. Mailed for you.