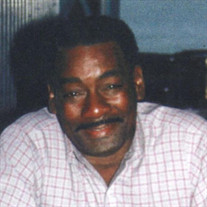 On Tuesday, April 27, 2021, the McDaniel family lost a special person, his tireless love and devotion to his family was evident even in his final days. Walter McDaniel was born on May 12, 1946 to Sam and Mattie McDaniel. He was just shy of his 75th birthday. He was affectionately known as Smokey, Zeke, Mac, Daddy and PawPaw. Walter is preceded in death by his parents and siblings LaVerne Johnson, Alice Windom, Brenda Peale, Lawrence McDaniel, Larry McDaniel and Darlene McDaniel. Walter graduated from St. Clair High School in 1964 and soon after enlisted in the U.S. Navy. While stationed in Norfolk, Virginia, Sonny Roulhac, a fellow sailor, brought Walter to his family home where he met his future wife Joyce Roulhac, the love of his life. They married on September 23, 1967 and eventually moved to the St. Louis area. This loving union produced four children: Tracy, Byron, Toni, and Derek. After serving in the military he worked for Chrysler, Schnucks and Stoops Express. Skilled in trucking, he started his own business, McDaniel Transportation Service. He employed several, including family members and friends who became like family. A hardworking man, Walter was a loving yet demanding boss. He used his skills as a truck driver to help family and friends and assisted with an International Convention of Jehovah’s Witnesses. Walter enjoyed gardening and spending time taking care of his yard. He had a green thumb. He also enjoyed watching football, westerns, and cooking shows. Every evening after reading the newspaper you could find him playing Solitaire and Sudoku. A unique man who left an impression on all who met him, Walter leaves behind a legacy as a loving father, devoted family man and good friend. He touched the hearts of many with his wisdom, understanding and generosity. Walter leaves to cherish his memory his loving wife Joyce; children Tracy Welch (James), Byron McDaniel (Demetia), Toni McDaniel and Derek McDaniel; four grandchildren Jada, Derek Jr., Jaylon and Mariah; eight siblings, Clifford McDaniel (Peggy), Joann Moore, Robert McDaniel, Peggy Beasley, Loretta McDaniel, Clarence McDaniel, Sammie McDaniel (Rene), Charlie McDaniel; and a host of nieces, nephews, cousins and friends. He will be missed until we see him again soon.

On Tuesday, April 27, 2021, the McDaniel family lost a special person, his tireless love and devotion to his family was evident even in his final days. Walter McDaniel was born on May 12, 1946 to Sam and Mattie McDaniel. He was just shy of his... View Obituary & Service Information

The family of Walter McDaniel created this Life Tributes page to make it easy to share your memories.

Send flowers to the McDaniel family.