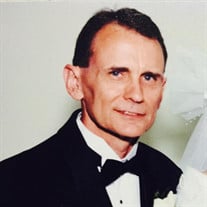 Tom passed away at home, Thursday January 20, 2022 with his loving family by his side. He was born to parents John Hanley Jr and Magadalen Rose (nee Boriski) Hanley February 3, 1942. He was the youngest of three sons. Tom grew up in Houston, Texas and he attended Austin High school. His family moved his senior year so he graduated from Bellaire High School. He went to Texas A&I College and then transferred to the University of Houston where he became a loyal Sigma Chi. Tom met and fell in love with his future wife “Bo" ,they married December 18, 1964. After a stint in the U.S. Army, he graduated with a degree in Marketing from University of Houston. Southwestern Bell hired him upon graduation, placing Tom in a leadership program. After transfers to San Antonio and back to Houston Tom & “Bo” and their new daughter Crista, were moved to St. Louis, where Tom worked at the Company headquarters until retirement. After retiring, Tom began to expand his community involvement and care of the elderly and needy. He worked with a friend building wheelchair ramps. He also volunteered for (ESL) “English as a second language”, tutored after school kids, and tutoring people in jail. He suggested “Workday, at New City Fellowship” start a wheelchair ramp program similar to the one he previously volunteered with. He ultimately installed about 200 wheelchair ramps for people who needed them, He did all kinds of repairs and work for many people in need. He was passionate about helping others, about God and about his family. Tom was active in his Church all of his life, and witnessed with his life as a good man, a good husband, father, grandfather and Christian. His favorite verse in the Bible was Eph 2:10 “For we are God’s handiwork, created in Christ Jesus to do good works which God prepared in advance for us to do.” he lived as he believed! Tom was beloved by all and will be missed on earth as he walks heaven’s streets. He is survived by his loving wife of 57 years, Elizabeth “Bo” Hanley, daughter Crista (Rick) Johnson, grandchildren Ricky and Ellie, brother William Robert (Exene) Hanley, nephews, nieces, cousins, brother and sisters-in-laws and many, many friends whom were all well-loved. A memorial and Celebration of life will be at held on Saturday February 12, 2022, visitation at 10:00 a.m. followed by services at 11:00 A.M. at Providence Reformed Presbyterian Church 9124 Sappington Rd. Saint Louis, MO 63126 Luncheon to follow in the Fellowship Hall. Burial will be a private Ceremony at Oak Hill Cemetery 10301 Big Bend Rd. Kirkwood, MO 63122 In lieu of flowers, donations may be made to Tom's favorite charity: Checks can be made out to ‘Workday’ 1142 Hodiamont Ave. St Louis, MO 63112 , with ramps and Tom Hanley’s name in the memo. Family and friends can review and share stories, photos and condolences online at www.stlfuneral.com and follow details of this event and others in the community at www.facebook.com/stlchapelhill.

Tom passed away at home, Thursday January 20, 2022 with his loving family by his side. He was born to parents John Hanley Jr and Magadalen Rose (nee Boriski) Hanley February 3, 1942. He was the youngest of three sons. Tom grew up in Houston,... View Obituary & Service Information

The family of Thomas Michael Hanley created this Life Tributes page to make it easy to share your memories.

Send flowers to the Hanley family.