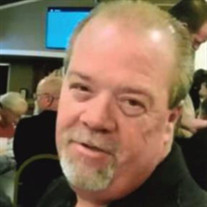 Scott Alan Gabel, 58, passed away peacefully at Barnes-Jewish Hospital due to a heart attack, with his family by his side on Sunday, September 6, 2020. Born August 26, 1962 at the naval hospital in Newfoundland, Canada earned him the nickname of Goofie Newfie. After his father retired from the Navy, the family settled in Catawissa, MO, where Scott resided at the time of his death. Scott graduated from Pacific High School in 1982. He met his future wife, Rita, when they both worked at McDonalds. After a year-long romance, on April 5, 1986 they were married at Central Baptist Church in Eureka. They welcomed their first daughter, Sarah, in 1990, and a second daughter, Melissa, in 1995. Scott spent much of his work life in management at McDonald’s and gas station convenience stores, and the last few years as a general contractor and handyman. He enjoyed spending time with friends and family – usually outside with a beer in his hand, standing by a grill cooking, with a NASCAR race or Garth Brooks song playing in the background. For the last year he embraced a new role as grandpa to his “little Supergirl” granddaughter, Zoey. Scott is survived by his wife of 34 years, Rita; daughters Sarah and Melissa; granddaughter, Zoey; father, Lester (Ann); brothers Randy (Joyce), Todd (Connie), and Craig (Leesa); nephews Kevin (Megan), Patrick (Heather), Dalton, Alex, and Davis; nieces Ashlee and Annika; and numerous cousins. He is preceded in death by his mother, Jane. Visitation Sunday, September 13, 2020 from 3:00 p.m. until 7:00 p.m. at CHAPEL HILL MORTUARY, 6300 Highway 30, Cedar Hill, Missouri. Funearl Service Monday, September 14, 2020 2:00 p.m. at CHAPEL HILL MORTUARY. Memorial donations may be made to the Ronald McDonald House Charities of Metro St. Louis, Inc. 4381 West Pine St. Louis, Missouri 63108. Family and friends can review and share stories, photos and condolences online at www.stlfuneral.com and follow details of this event and others in the community at www.facebook.com/stlchapelhill.

Scott Alan Gabel, 58, passed away peacefully at Barnes-Jewish Hospital due to a heart attack, with his family by his side on Sunday, September 6, 2020. Born August 26, 1962 at the naval hospital in Newfoundland, Canada earned him the nickname... View Obituary & Service Information

The family of Scott Alan Gabel created this Life Tributes page to make it easy to share your memories.

Send flowers to the Gabel family.