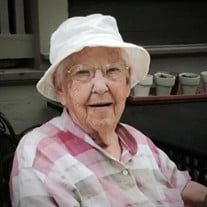 Ruth M. (Peterson) Roddy, was born February 16, 1920 near Waynesville MO and left this life on January 11, 2022 at 101 years of age at home in St. Louis with family at her side. Dear mother of Mary (Richard) Schlereth and Janis Roddy (Julie Sutfin). Beloved grandmother of Kelly (Robert) Drew, Julie (Daniel) Lammers. Great grandmother of Alyssa and Matthew Drew and Nicholas Lammers. Aunt, great-aunt, cousin and friend. She was preceded in death by her parents; John J. Peterson and Mary (Molly) Howard, brothers; Warren, Jack and Rene Peterson, and sisters Katherine Ramsey, Dorothy Smith and Emma Wallace, Margie Johns, Florene Peterson, Jane Copeland. Independent, strong, loyal to family, curious about nature and the world around her. Ruth was sixth in the line of 10 siblings, and she was the last of that generation to leave us. They grew up on a farm along the Gasconade River in Pulaski County MO that had been homesteaded by their great grandfather from Sweden. She never stopped loving the Ozarks, having collected every practical guide the MO Conservation department ever published and continuing to mark the seasons by what wild berries, fruit, nuts or greens were ripe for harvest. During WWII she worked in the factory riveting airplanes for Curtis Wright and eventually retired from McDonnel Douglas Aircraft. She was courageous enough to leave marriages when she needed to, striking out and making a good life for her and her daughters on her own, in a time when that was difficult for women. She stayed connected to brothers and sisters and their families. They all regularly traveled back to the farms or dropped in to each other’s houses in the city unannounced. There would almost always be a pot of beans and corn bread or barbequed pork steaks and fried potatoes to share. She planted flower and organic vegetable gardens everywhere she could and learned to can the harvest and paint watercolors when she retired. Her eldest daughter remembers her doing cartwheels in her late twenties while exclaiming “I’m going to live to be one hundred!” She did, and more. " In lieu of flowers, memorial donations may be sent to St. Louis Public Television (NinePBS.Org) or your local PBS station."

Ruth M. (Peterson) Roddy, was born February 16, 1920 near Waynesville MO and left this life on January 11, 2022 at 101 years of age at home in St. Louis with family at her side. Dear mother of Mary (Richard) Schlereth and Janis Roddy (Julie... View Obituary & Service Information

The family of Ruth M. (Peterson) Roddy created this Life Tributes page to make it easy to share your memories.