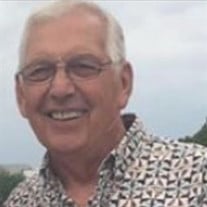 Baumgarth, Roy, of Cedar Hill, Missouri, was born February 26, 1946 in Washington, Missouri to Walter and Alice (nee Burns) Baumgarth and entered into rest Tuesday, November 16, 2021 at home in Cedar Hill, Missouri at the age of 75 years, 8 months, and 21 days. He is preceded in death by, his parents, He is survived by, loving wife, Bennie (nee Tabor) Baumgarth, four (4) children, Lynn (Joel) Hyatt of Cedar Hill Missouri, Brad (Michelle Bailey) Baumgarth of Cedar Hill Missouri, Steve (Nikki) Hunt of Stuart Florida, and Michele Stevenson of Cedar Hill Missouri, twelve (12) grandchildren, Dustin, Jessalyn (Bryan), Drake, Laney, Brady, Eli, Bryan, Jenna (Garrett), Morgan, Onna, Madi, and Ben, five (5) great grandchildren, Isabella, Sophia, Lincoln, Joshua, and Kinsley, two (2) sibling, Walter (Barb) Baumgarth of Vichy Missouri and Charles (Shirley) Phillips of St. Louis Missouri, four (4) sister-in-laws, Hazel (Dale) Easky of St. Clair Missouri, Elda Phelps of Mountain View Missouri, Bobby Jo Tabor of Mountain View Missouri, and Shirley Tabor of Summersville Missouri, along with numerous extended family and friends. Roy’s family meant the world to him. He’d go out of his was to help his children and was always there for his wife. Sitting still was never his thing, from cows to handy work he always kept busy. He enjoyed his Baby Blue ‘65 Chevelle and also riding his motorcycle with his wife. As a part owner of Bill Williams construction, he worked all the way to retirement in 2017. You knew you were on his good side if he was picking on you. One of his favorite escapes was the Lake with friends and family. His family will forever hold his memories close to their hearts. He will be fondly remembered and dearly missed by all who knew and loved him. In lieu of flowers memorial donations may be made to Cardinal Glennon Children’s Hospital. Family and friends can review and share stories, photos and condolences online at www.stlfuneral.com and follow details of this event and others in the community at www.facebook.com/stlchapelhill.

Baumgarth, Roy, of Cedar Hill, Missouri, was born February 26, 1946 in Washington, Missouri to Walter and Alice (nee Burns) Baumgarth and entered into rest Tuesday, November 16, 2021 at home in Cedar Hill, Missouri at the age of 75 years, 8... View Obituary & Service Information

The family of Roy Baumgarth created this Life Tributes page to make it easy to share your memories.

Send flowers to the Baumgarth family.