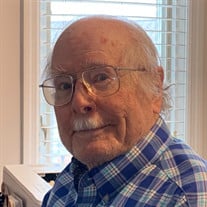 Children: Robert R. Annand, Jr. (Tamarah), Mary Kate Cornelison (Gary), James Annand (Christine), Laura Rossmann (John), and Melissa Vargas (Victor) Grandchildren: James and William Annand; Chris (Jackie,) Jessica, and Jason Cornelison; Cristen (Sean Knobelock), Andrew, and Veronica Annand; and Alexander and Madeline Vargas. Two Great Grandchildren: Ophelia “Little Bit” and Henry Knobelock. Robert “Bob” Annand was an exemplary husband, father, grandfather and friend to all who knew him. He was married to his wife, Mary, for almost 50 years, until her death in 2008, and together they raised five children. He was an accomplished chemist, holding 15+ patents. He attended the University of Texas for his undergraduate and Ph.D., and he worked in both the petroleum and food industries for over 40 years. He became an author in his retirement, and shared his passion for writing about his life adventures by leading two writing groups at Friendship Village, where he lived the last 11 years. He was a leader for many years at Hamilton Christian Church, and loved to study and learn about his faith with others. Services will be held on Saturday, December 4, 2021 at 2:00 pm at Friendship Village. 15201 Olive Blvd. St. Louis, MO 63017

The family of Robert "Bob" Annand created this Life Tributes page to make it easy to share your memories.

Send flowers to the Annand family.