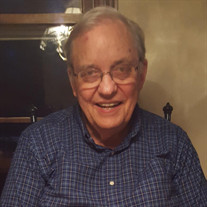 Bardon, Richard Alan “Dick” of High Ridge, Missouri was born January 26, 1940, in Saint Louis, Missouri, to Richard George and Barbara (nee Mathias) Bardon and entered into rest Saturday, November 28, 2020 at the age of 80 years. He is preceded in death by, his parents and one brother-in-law Charles Plummer. He is survived by, his wife Carol (nee Abernathy) Bardon of High Ridge, Missouri one son Richard William (Susan) Bardon of High Ridge, Missouri one grandson Richard David Bardon. two siblings, Thomas (Donna) Bardon of Edwardsville, Illinois and Patricia Plummer of Ballwin, Missouri. nieces & nephews and many other treasured family and friends. Dick attended Southeast Missouri University where he was a member of Tau Kappa Epsilon fraternity. He Graduated from SEMO with a BS, MA in Education. During his college years he also worked on the Mercury Project, for McDonnell Douglas. Dick began his teaching career as an industrial arts teacher in Crystal City, where he met and married his wife Carol. Dick then became a teacher in the Affton School District where he retired in 1995 as head of the Industrial Arts Department. Among his many accomplishments he designed and built his own home in 7 months in 1970 while working a fulltime job and teaching night classes. Dick also was a Past Director of the Vintage Chevrolet Car Club and Past President of the Show Me car club. He was a collector of antique cars and radios. He also was member of Knights of Columbus, St. Anthony of Padua Catholic Church in High Ridge, as well as a lifetime member of the National Education Association. In Dick’s spare time he enjoyed building furniture for many people who were very special to him. He will be fondly remembered and dearly missed by all who knew and loved him. Memorial Service on Thursday, December 10, 2020 at 10:00 a.m. at St. Anthony of Padua Catholic Church, 3009 High Ridge Blvd., High Ridge, MO 63049. Memorial donations may be made to the St. Anthony of Padua Catholic Church Food Pantry, 3009 High Ridge Blvd., High Ridge, MO 63049, American Cancer Society, 4207 Lindell Boulevard, Saint Louis, MO 63108, The American Cancer Society, or the Alzheimer’s Association, 9370 Olive Boulevard, Saint Louis, Missouri 63132. Family and friends can review and share stories, photos and condolences on line at www.stlfuneral.com and follow details of this event and others in the community at www.facebook.com/stlchapelhill.

The family of Richard "Dick" Bardon created this Life Tributes page to make it easy to share your memories.

Send flowers to the Bardon family.