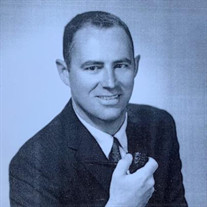 Paul Marti, Jr., son of Paul and Edna Marti, died Friday, April 1, 2022. He was 92 years old. He resided at 105 Minturn, Oakland, Mo. Paul’s wife, Audrey (Audie Lyons) Marti was an endearing and devoted partner throughout their 53 years of marriage. She passed away on August 26, 2012. He is survived by his son, Dane Marti of St. Louis and daughter, Kara Marti of Kansas City; four grandson’s Martez, Jayson, Marjae, and Kai Marti. Also survived by him is his sister Bonnie Marti Mahood and her husband William Mahood, as well as his niece Kristie Tusinger and her husband Steve. Paul graduated from Webster Groves High School in 1948. As a Boy Scout, he earned the Eagle and Bronze Palm. He worked as a lumber jack in the mountains of Idaho, before attending Kansas State University. While there, he was the President of the ATO Fraternity. He graduated from KSU with a Bachelors of Architecture. He was then drafted into the Army and attached to the United States Airforce. He was stationed at Beale Airforce Base in California. While there he was awarded the Top Engineer of Beale AF Base Honor. Mr. Marti then enrolled at The University of California, Berkley where he earned a Master’s Degree in 1958. For over 20 years, he worked as the VP of Smith Entzenroth Architects, where he was project Architect over four buildings at Principia College, as well as a building at Washington University, and St. Louis University. He also was over the renovations of The West Wing of the St. Louis Art Museum. Paul taught architecture for six years at Washington University. He was the Chairman of the Board at the historic Cupples House, at St. Louis University. He opened his own firm in Clayton, Mo. where he designed three libraries and The Springfield Art Museum. He designed four private homes that were published in national magazines. His own home was honored with an American Institute of Architects Award and was published in several magazines and a book. Paul served as President of the Clayton Optimus Club, President of the St. Louis Municipal League and he was elected mayor of Oakland, Mo. for 20 years. A Funeral Service will be held on Friday, April 8th at 1:00 PM at Chapel Hill Mortuary-10301 Big Bend Rd. Visitation from 11:00 AM until the time of service. Interment at Oak Hill Cemetery.

The family of Paul Marti Jr. created this Life Tributes page to make it easy to share your memories.

Send flowers to the Marti family.