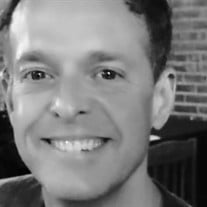 Paul Hawkins, 46, passed away at Barnes Jewish Hospital in St. Louis on December 20, 2021. He was born in St. Louis, MO, on September 11, 1975, to John and Milena Hawkins. Paul is preceded in death by his father, John. He is survived by his mother, Milena Hawkins, sister, Sarah Martin, brother-in-law, Jason Martin, and niece and nephew, Ava and Will. Paul grew up in the St. Louis area and later the St. Charles area. He attended Grace Church in St Louis. He graduated in 1993 from Francis Howell High School and then from Maryville University. Since a child, Paul has had a heart for Jesus. He never turned away. He was steadfast in that love and also the love for other people. Paul would lift up everyone. He made everyone feel good about themselves and wanted them to spend eternity in heaven. This was his lifelong goal. He lived the Christian way by loving God with all of his heart, mind, and soul. He also loved others as himself. He gave away every dollar he had to someone he felt needed it more than him. He poured all of his time into helping the homeless and lost. He was the most humble servant of God and lived that way every day of his life. His passion was bringing souls to God, and he would witness wherever he went—walking up to people and sharing the good news or possibly leaving information about God along his journey, whether that meant on a table after a meal or in a lobby of a building. There were signs that Paul was there. That he cared about everyone and wanted others to one day join him in heaven. Paul had a genuine smile, a beautiful soul, and a positive word to say about everyone and everything. He had a sense of humor that was so light and fun, just as he was. Open, loving, non-judgmental, fun, and generous are some words that readily come to mind when thinking about Paul. A true free spirit, Paul loved to travel. He would travel around the United States with ease and always be ready to pick up and go. With a Spanish heritage, he had a heart for Mexico. He also loved Israel and had recently visited the Holy Land. He spoke about the joy of walking in the same places that Jesus once did. He also loved Africa and had plans to go there next to help anyone in need. He wanted to build homes for the homeless and help in the churches. He was willing to do anything needed to help someone who could use a hand. Paul loved music. Many of his friends and family members remember Paul doing things around the house or out and about while singing. He had a strong and beautiful voice. This was apparent in his teenage years. He was comfortable singing in front of anyone or all alone. Just another way to make others around him smile, or share his love for the Lord, if the moment was right, he would happily sing. He also enjoyed time with his friends. Going out in the evenings with them or hanging out during the days, Paul was an extrovert and cared deeply about those friendships, many of which were lifelong. The times they shared throughout the years meant a lot to Paul, and he would talk about old times with friends and hold those memories close to his heart. Paul was a true artist. He had raw talent to draw, sketch, or paint the most beautiful artwork from a young age. His creations were beyond inspiring and began at such a young age. Still always humble, most didn’t even know of this incredible talent. He was planning on creating illustrations for a Children’s book with his sister, Sarah. He was so excited about that. He and Sarah shared a close brother and sister bond and so much love. Paul will be missed. He will be remembered, and he will always be loved. His family greatly appreciates the loving and caring team of Doctors and Nurses at Barnes Jewish Hospital in St. Louis. In lieu of flowers donations can be made to Advancing Native Missions.

Paul Hawkins, 46, passed away at Barnes Jewish Hospital in St. Louis on December 20, 2021. He was born in St. Louis, MO, on September 11, 1975, to John and Milena Hawkins. Paul is preceded in death by his father, John. He is survived by his... View Obituary & Service Information

The family of Paul J Hawkins created this Life Tributes page to make it easy to share your memories.

Paul Hawkins, 46, passed away at Barnes Jewish Hospital in St....

Send flowers to the Hawkins family.