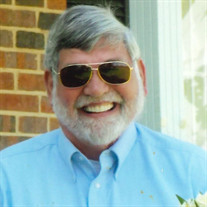 Fuchs, Kevin Ray, of Eureka, Missouri was born December 12, 1950 in St. Louis, Missouri to George and Ann (nee Strawhun) Fuchs and entered into rest Tuesday, November 30, 2021 in St. Louis, Missouri at the age of 70 years, 11 months and 18 days. He is preceded in death by his parents, one (1) son, Kevin Ray Fuchs Jr. and one (1) brother, Dennis Fuchs. He is survived by his loving wife, Diane (nee Burchard) Fuchs of Eureka, one (1) daughter, Melissa (Noah) Johnson of San Diego, four (4) grandchildren, Chris, Maddie, Ollie, and Henry, one (1) great grandchild, Aubrey, seven (7) siblings, Michael Fuchs, Patty Hunt, Sandy (John) Huber, Karen (Rick) Stark, Marty (Melinda) Fuchs, Shelly (Bruce) Ploetze, and Chris (Kim) Fuchs, along with numerous extended family and friends. Kevin was a kind and loving man. He would do anything for his family. Making people laugh and smile was one of his favorite things. If he wasn’t teasing his grandchildren, he was cracking jokes to anyone who would listen. He loved his ’63 Red Chevy and liked to show it off at car shows. He found new friends through the Local Carpenters Union. Kevin was a strong man, never letting cancer dim his smile. His wife meant the world to him just like his daughter, grandchildren, and great grandchildren. He will be fondly remembered and dearly missed by all who knew and loved him. Memorial Visitation Saturday, February 12, 2021 from 10:00 a.m. until time of Memorial Mass at 11:00 a.m. at Sacred Heart Catholic Church, 17 Ann Avenue, Valley Park, MO 63088. In lieu of flowers donations can be made to American Cancer Society at 4207 Lindell Boulevard, St. Louis, MO 63108. Family and friends can review and share stories, photos and condolences online at www.stlfuneral.com and follow details of this event and others in the community at www.facebook.com/stlchapelhill.

The family of Kevin Fuchs created this Life Tributes page to make it easy to share your memories.

Send flowers to the Fuchs family.