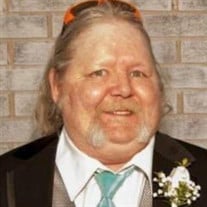 Evers, Kenneth M. Sr., of Cedar Hill, Missouri, was born April 24, 1958 in Kirkwood, Missouri to Jerry Evers and Joan (nee Wallace) Hodges and entered into rest Thursday, December 30, 2021 in Fenton, Missouri at the age of 63 years, 8 months, and 6 days. He is preceded in death by, his parents, father, Jerry Evers, mother, Joan (David) Hodges three (3) siblings, Danny Hodges, Kevin Hodges, and Jeff Hodges, He is survived by, his loving wife, Elizabeth Theresea (nee Boly) Evers, two (2) children, Kenny (Sam) Evers & Adam (Libby) Evers, six (6) grandchildren, Gavin, Zach, Tyler, Bella, Brooke, and one on the way, two (2) siblings, Karen (Ken) Brown and Steven Hodges, five (5) nieces and nephews, Alan Massingill, Christina Ziegler, Kenny Brown, Travis Brown, and Jes Hodges, along with numerous extended family and friends. Ken was a wise man. His children meant the world to him and he’d do anything for them. If they ever needed help, he was there with a solution and a wise word. His grandchildren always made his face light up, telling jokes and teasing anyone around. He had never met a stranger. His faith showed in everything he did and his love for God never wavered. Watching NASCAR and the St. Louis Cardinals was one of his favorite things. His laughter and jokes will forever be with those he loved. He will be fondly remembered and dearly missed by all who knew and loved him. Memorial Donations can be made to the Church of The Nazarene 365 Saline Road, Fenton, MO 63026. Family and friends can review and share stories, photos and condolences online at www.stlfuneral.com and follow details of this event and others in the community at www.facebook.com/stlchapelhill.

The family of Ken M Evers Sr. created this Life Tributes page to make it easy to share your memories.

Send flowers to the Evers family.