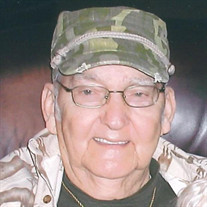 Lewis, Johnnie Bradley of House Springs, Missouri was born on July 22, 1931 in Pineville, Kentucky to John Bradley Lewis and Minnie Ethel (nee Bailey) Lewis, and entered into rest on December 4, 2020 at his home in House Springs, Missouri at the age of 89. He is preceded in death by his wife, Peggy Virginia Lewis, his parents, and seven siblings: Otto Lewis, Ella Tarvin, Allen Lewis, Wilma Asher, Elmo Lewis, Jean Lawson, and Vivian Woods. He is survived by two children, Kathy (Kevin) Miller of High Ridge, Missouri and John B. Lewis III of House Springs, Missouri. Five grandchildren: Rob Miller, Matt (Laura) Miller, Jason (Tricia) Miller, Lindsey (Jason) Perkins and Brett (Jaime) Miller. Eight great grandchildren: Malone, Liam, Elaina, Landon, Maggie, Evan, Nolan and one on the way. Johnnie served in the Air Force from 1951-1955, stationed primarily in Europe. He was employed by Chrysler from 1950-1951, and again from 1955-1995, retiring after 41 years of service from the plant in Fenton. Johnnie had many interests, including coin and stamp collecting, and was a gifted card player. He took great pride in his yard, building rock walls, bridges, and even a small castle by hand. With Peggy’s love of flowers and gardening, their yard became the site of several garden tours and photo destinations for wedding and prom pictures. He will be fondly remembered and dearly missed by all who knew and loved him. Services will be private. In lieu of flowers, memorial donations may be made to the Open Door Animal Sanctuary, 6065 Duda Road, House Springs, Missouri 63051, or the St. Jude Children’s Research Hospital, P.O. Box 1000, Dept. 142, Memphis, Tennessee 38148-0412. Arrangements under the direction of Chapel Hill Mortuary, 6300 Hwy 30, Cedar Hill, Missouri 63016.

The family of Johnnie B. Lewis created this Life Tributes page to make it easy to share your memories.

Lewis, Johnnie Bradley of House Springs, Missouri was born on...

Send flowers to the Lewis family.