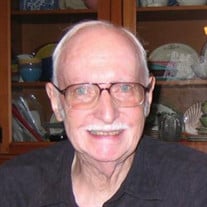 John Lawrence Hill, 95, went to be with the Lord November 4, 2020. He was born February 26, 1925 in St. Louis, MO, to Rose and Lawrence Hill. He was preceded in death by his parents, his wife, Mary Kathryn “Katie” Hill; daughter Sandra Hill and sister, Yvonne Jacobs. He is survived by his children, John Lawrence Hill, Jr., Paul (Mary) Hill, Deborah (Bill) Triola; grandchildren Christopher (Liberty) Hill, Amanda Hill, Ben (Dana) Valenti, Emilia (Coty) Hurley; great grandchild, Rosemary Hill, and sister, Lucienne “Lulette” Wald. John served in the Army during WWII, taking part in three major battles, including Battle of the Bulge. His unit liberated the concentration camp at Mauthausen. He graduated as an industrial engineer from Washington University, St. Louis, MO. He worked at several companies, and retired from DuPont after working there for 24 years. John loved music, and played the violin in orchestras and quartets. He served as an elder and sang in the choir at the church in Newark where he and Katie were members for many years. After his retirement he focused on helping others—he was truly genuine in his interest in other people. This made him uniquely equipped for the volunteer work he did. He visited hospice patients, and was also involved with Thresholds, a program where volunteers would teach inmates decision-making and problem-solving skills. John was a good listener and was interested in people from all walks of life. He will be remembered for his kindness to others and his positive, upbeat attitude. A celebration of life will be held Saturday, November 21st from 11:00 a.m. – 1:00 p.m. at Chapel Hill Mortuary – Kirkwood, Oak Hill Cemetary, 10301 Big Bend Road, Kirkwood, MO, 63122.

The family of John Lawrence Hill Sr. created this Life Tributes page to make it easy to share your memories.

Send flowers to the Hill family.