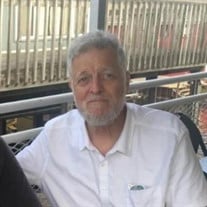 John W Hawkins went home to be with Jesus on November 10th just several days after turning 72 years old. He was born in St. Louis, Missouri on November, 6th 1949 to Ethel and Elmer Hawkins. John is survived by his children, Paul Hawkins, Sarah Martin and son in law, Jason Martin. John had a very close relationship with Paul and they were together until his last breath. Although Sarah didn’t live nearby they also had a strong bond and a lot of love. He treated Jason as his own and thought the world of him. He is also survived by his grandchildren, Ava (6) and Will (9 months). John was an only child and was loved immensely by his parents. He was involved in Boy Scouts all the way through to an Eagle Scout. He had the ability to tie any kind of knot imagined and could have lived in the wilderness if he needed to. He was an Engineer by trade and had graduated from Missouri University of Science and Technology in Rolla. It showed. He could fix any electrical problem there was but also work on a car. He was a man of many trades. His career was spent mostly at Siemens Medical where he worked on MRI and CAT scan machines until he retired in 2013. When he retired, he would often say, he was was busier now then when he had a full time job. That was because one of his dreams was to own property. He made that happen when he purchased several apartment buildings. It was a dream come true for John and Paul to run these and he had the flexibility to live his free-bird lifestyle. During this time, John and Paul traveled the US along with Mexico and Israel. John had a love for Israel and the Jewish faith. Many times John would talk about going back to Israel. He loved to visit the places that Jesus walked and he was baptized again during his last trip there. John studied Hebrew because he wanted to understand the Bible as it was written without translation. When John would say Goodbye, it was always a simple “Shalom” with a smile. He smiled easily and loved to joke around. John was family focused. His priorities were Paul and Sarah. When they were younger he used to take them camping or on family vacations around the US. He used to be playful and fun. That never changed. He couldn’t get around as easily in his later years but his personality was still the same. Always playful and light. He didn’t take life seriously and things seemed to just work out for him. He always trusted in God and instilled those values in his children. A Foodie in his own way, John was passionate about restaurants. If he saw a buffet he was going to try it. Although he didn’t cook often, he had a talent in the kitchen. Like many things with John, the recipes often just came together and worked out. As life did for him. John will be tremendously missed but never forgotten. He will live on in the hearts and memories of those that love him.

The family of John W. Hawkins created this Life Tributes page to make it easy to share your memories.

John W Hawkins went home to be with Jesus on November 10th just...

Send flowers to the Hawkins family.