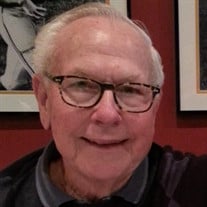 John Allen Hartmann Life Story John Allen Hartmann was born December 17, 1932 in Kirkwood, MO, the ninth child (of ten) of August and Magdalena (Ahner) Hartmann. He graduated from Kirkwood High School in 1950, took business classes at Washington University, then served in the U.S. Air Force from 1952 to 1956 as a Communication Center Specialist. He was stationed in Korea on Chodo Island for 13 months, then at the radar station in Othello, Washington, achieving the rank of Airman First Class. He married Irene Martha Scharrer on August 20, 1954 in Frankenmuth, Michigan, and to this union four daughters were born. He was president of Hartmann Florist, a greenhouse florist business, from 1956 until 1985, growing cut chrysanthemums and pom-poms, hanging baskets and bedding plants. He sold bedding plants at the Kirkwood Farmer’s Market and ran the Christmas Tree stand there for many years as well. Following his extended career in floriculture, he worked as a numismatist (coin expert) for Scotsman Coins. John was a lifelong resident of Kirkwood and a lifelong member of Concordia Lutheran Church in Kirkwood. He was baptized on January 8, 1933 and confirmed into the Christian faith on April 14, 1946. While in the Air Force, he helped start and name Pilgrim Lutheran Church in Othello, Washington. At Concordia, he loved the Men’s Bible Study group and reading Scripture portions to the congregation on the 4th and 5th Sundays. John was a member of the St. Louis Growers Association, the Missouri Farm Bureau and the Fellowship of Christian Athletes. He was an avid Cardinals, Blues and Rams fan. He loved playing golf and had two holes-in-one. He also loved gardening, fishing and bowling and playing softball, bridge and poker. He was thrilled to have many opportunities to travel. When his son-in-law, Kevin Schumacher, was stationed in the Coast Guard in Florida, Washington, D.C., Alaska and Hawaii, John and Irene would travel to see them and enjoy all kinds of family traveling adventures in those areas. One of his fondest memories as a veteran was joining an Honor Flight to Washington, D.C. in August, 2017. John will be greatly missed by his beloved wife, Irene, to whom he was married over 66 years, as well as by his daughters and sons-in-law, Beverly (Ralph) Flori, Martha (Kevin) Hasting, Jane (Kevin) Schumacher and Sarah (Ben) Burkemper. He will also be missed by his eleven grandchildren, Corey (Zack) Park, Kelly (fiance’ Dave Uffenbeck) Schumacher, Theresa Hasting, Katie (Kevin) Heckman, Andrew (Lindsey) Flori, Ashley (Pedro) Palomino, Aleisha Flori, Mihaela Hasting, Elizabeth, Joseph, and Anne Burkemper, and five great-grandchildren, Jada Stefacek, Isaiah and Noah Park, Preston Hasting and Elias Palomino. He leaves behind many beloved nieces, nephews and friends as well. John was pre-deceased by his parents and his nine siblings, Gus, Fred, Gertrude, Helen, Robert, Martin, Ruth, Norma and Richard. The burial will be private. A memorial celebration of life for family and friends will be held in 2021. If you are interested, please leave your contact information in the online guestbook at www.stlchapelhill.com. A Virtual Visitation will be held on Thursday, December 17 and Friday, December 18 from 6:00 to 8:30 pm. CST. Email [email protected] for more information and a Zoom link. Please give Corey your name and your relationship to John. Memorial contributions may be made to Concordia Lutheran Church, 505 South Kirkwood Road, Kirkwood, MO 63122. Arrangements are under the direction of Chapel Hill Mortuary, 10301 Big Bend Road, Kirkwood, MO 63122.

The family of John Allen Hartmann created this Life Tributes page to make it easy to share your memories.

Send flowers to the Hartmann family.