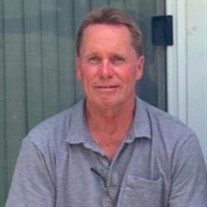 John “Tim” Timothy Giger March 18, 1953-April 8, 2022 69 years old Born to Martin Giger and Ellen Fleek (Dolson) on March 18, 1953 in St. Louis, Mo. He and his abundance of siblings grew up in Jefferson County, Mo. More than likely if you know or knew a Giger it is one of the following; Marty(Geri), Danny(Cathy), Kathy(Raymond Burns), Mark, Larry, Tom, Andy, Mickey, and Shane. Tim and his wife of 43 years, Doris (Boyer) raised their three sons; Tim(Leah), Mike(Beth), and Sam in High Ridge, Mo. His grand kids were blessed to have him in their lives, his world revolved around them. If you saw Tim out likely Cohen, Annabelle, Ruby or Luke was by his side. He enjoyed being outdoors and his almost daily trail walks. All four of his grand kids loved nothing more than getting to have their time at “the cabin” with Papa Tim. Big Tim (as he was better known as) was known and loved by many family members, friends, and coworkers. His sudden passing left a void in many lives that will never be replaced, and he will always be remembered. Donations can be made in Tim’s honor to Missouri Conservation to provide funds for trail maintenance at mochf.org/donate-online A memorial visitation will be held in Tim’s honor at a later date.

The family of John Timothy Giger created this Life Tributes page to make it easy to share your memories.

Send flowers to the Giger family.