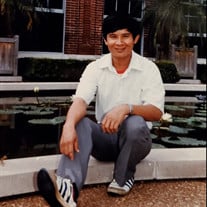 Jim passed away on February 12, 2022 in St. Louis, Missouri with his loving family by his side. He was born on February 22, 1951 in Hanoi, Vietnam. At the age of eighteen, Jim enlisted in the Army of the Republic of Vietnam as a Radioman. A few months later, his Commanding Officer noticed his intellect and sent him to school to become a medic. After the war, Jim immigrated to the United States of America. A year later, he met and fell in love with his future wife Bich, and they married in January 1986. Jim adjusted to life in the United States quickly. He took his citizenship test and passed on the first try. He took on any job he could get, eagerly learning and loving it. He would spend hours learning English while also providing for his family of eight. Jim was passionate about helping others and about his family. He was a true jack of all trades. In the Vietnamese community, he was always the one to be called when someone needed help and he was always willing and ready. Jim was also a huge history buff; he was particularly interested in the Eastern Front in World War II and the Cold War. At home, he had shelves of books he had already read and would always have a history podcast playing in the background. Jim’s family will always remember his bright smile and infectious laugh. He was a devoted son, sibling, husband, and father. He is survived by his wife Bich Thi Tran of 36 years, his six (6) children, Robert (Quiana) Nguyen, Michelle Tran, John Tran, Maria Nguyen, Sarah (Jeff) Lee and Jennifer Brown, and one (1) grandchild, Jacob. He will be fondly remembered and dearly missed by all who knew and loved him. A graveside service will be held at Oak Hill Cemetery on Thursday, February 17, 2022 at 10AM. Family and friends can review and share stories, photos and condolences online at www.stlfuneral.com and follow details of this event and others in the community at www.facebook.com/stlchapelhill.

Jim passed away on February 12, 2022 in St. Louis, Missouri with his loving family by his side. He was born on February 22, 1951 in Hanoi, Vietnam. At the age of eighteen, Jim enlisted in the Army of the Republic of Vietnam as a Radioman.... View Obituary & Service Information

The family of Jim Brown created this Life Tributes page to make it easy to share your memories.

Send flowers to the Brown family.