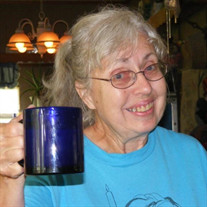 Bloecher, Janet Louise, of Dittmer, Missouri, was born May 8, 1941 in St. Charles, Missouri to Daniel and Marie Hazel (nee Clarke) Maxson and entered into rest Wednesday, April 6, 2022 in Sunset Hills, Missouri at the age of 80 years, 10 months and 29 days. She is preceded in death by her parents, husband Raymond Bloecher, and her sister Barbara French She is survived by, two (2) children, Rosie Bloecher of Dittmer, Missouri and David (Greta) Bloecher of Hillsboro, Missouri four (4) Grandchildren, Dean Bloecher, Cody (Tashia) Bloecher, Ashley (Gerald) Forde, and Amanda (Rob) Hall Five (5) great grandchildren, Abbigale, Talia, and Bruce Bloecher, and Wilder and Axel Hall one (1) brother-in-law, Steve French one (1) nephew, Peter (Donna) Schrankle one (1) great niece, Brett Schrankle two (2) cousins, Becky Maxson Daughtery and Cathie Eaton Maxson one (1) godson, Dane Horst one (1) beloved cat, Mumford along with numerous extended family and friends. Janet was a loving daughter, sister, wife, mother, grandmother, aunt and friend. She never had a dull moment and was rarely seen without a smile or sparkle in her eyes. Her laughter was contagious and lived her life with grace and love. In 1959 she graduated from St. Charles High School and made sure everyone knew she was President of the Elvis Presley fan club. In 1965 she married her loving husband, Ray. She worked as a Typist and Recorder for the Frisco Railroad, and as a Type-setter for the Jefferson County Record Newspaper until 1966 when she became a stay-at-home mom and never regretted it. Her purple flowers and cheerful smirk will forever live with those she touched. She will be fondly remembered and dearly missed by all those who knew and loved her. Memorial donations may be made to the family directly or to Open Door Animal Sanctuary. Celebration of life will be announced at a later date. Family and friends can review and share stories, photos and condolences online at www.stlfuneral.com and follow details of this event and others in the community at www.facebook.com/stlchapelhill.

The family of Janet Louise Bloecher created this Life Tributes page to make it easy to share your memories.

Bloecher, Janet Louise, of Dittmer, Missouri, was born May 8,...

Send flowers to the Bloecher family.