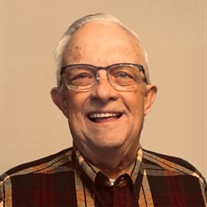 George Frederick ‘’Fred’’ Brooks of Cedar Hill, MO, formerly of Newport News, VA, was born on Dec. 15, 1937 and entered into rest on Nov 16, 2020, after a lengthy battle with heart disease. Fred was born in Richwood, West Virginia, to Hiram K. and Myrtle (nee Artrip) Brooks. Fred grew up in a close knit community where his family ran the local Hardware and Furniture Stores. He enjoyed many varied pursuits throughout his young adulthood including schooling at Greenbrier Military Academy and West Virginia University, playing percussion in a collegiate band, driving his 1958 Austin-Healey 100-6, helping out in the family business, and studying Aeronautical Engineering at Embry-Riddle Aeronautical University in Daytona Beach, Florida. He also served in the U.S. Air Force from 1960-64. When beginning his career as an aerospace engineer, he was first employed at McDonnell Douglas in St. Louis, eventually settling in Hampton Roads, Virginia, to take up employment with LTV Corporation and Lockheed Martin Corporation until his retirement in 1999. Fred was a true American Patriot who loved his God, his country, and his family. He was formerly a member of First United Church of Christ in Hampton Virginia, and currently St. Martin’s United Church of Christ in Dittmer, Missouri. He was a 50-year Mason with the Richwood West Virginia Masonic Lodge. He always put his family first, and his greatest source of pride were his adult children, their spouses, and the grandchildren. Fred also loved animals and had a little companion dog in his lap most days. Fred is preceded in death by his parents. He is survived by his beloved wife of 47 years, Elaine Bohle Brooks. He is also survived by three children: son and daughter-in-law, Bryan and Evelyn Brooks of Woodbridge, Virginia; son and daughter-in-law, Matthew and Krista Brooks of Hanover, Maryland; and daughter and son-in-law, Rebecca and Samuel Maindonald of Exminster, United Kingdom. His six beloved grandchildren are Henry and Walter Brooks, Hanover, Maryland; Tyler and Stella Brooks, Woodbridge, Virginia; and George and Woodrow Maindonald, Exminster, United Kingdom. He is also survived by numerous extended family and friends in West Virginia, Virginia, and Missouri. An outside Memorial Service will be held Friday, Nov. 20, 2020, at 11 am at St. Martin’s United Church of Christ, Dittmer MO. A Celebration of Life will be held at a later date. In lieu of flowers, memorial donations may be made to St. Martin’s United Church of Christ, 7890 Dittmer Ridge Road, Dittmer, MO 63023 or to Open Door Animal Sanctuary, 6065 Duda Road, House Springs, MO 63051.

The family of George Frederick "Fred" Brooks created this Life Tributes page to make it easy to share your memories.

Send flowers to the Brooks family.