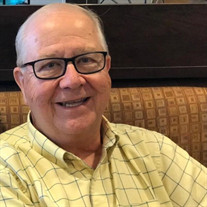 Gary Lindsey passed away peacefully at home with family at his side on Tuesday, October 26, 2021. Gary is survived by his wife of 51 years Michele and his four children Jason Lindsey (Renee), Erin Morice (Mitch), Katie Castiaux (Eric) and Christian Lindsey (Leslie). Gary was the proud Papa to Hannah, Jack, Ava, Parker, Grant, Clark, Charlotte, Alicia, Nicolette and great granddaughter Carmina. He was preceded in death by his two brothers Clifford Lindsey Jr. and Spencer Lindsey and is survived by his sister Betty Prasuhn. Gary was a proud brother-in-law, uncle and friend to many. Gary grew up in St. Louis, Missouri. Post high school, he served in The United States Air Force and was stationed in Grand Forks, North Dakota where he met Michele. Upon his honorable release from the Air Force, Gary and his new bride moved back to St. Louis to begin their life together. Gary spent the bulk of his career as an educator, working at Special School District and The Missouri School for the Blind. His passion for helping others, his patience and attention to detail made him a teacher and coworker to admire. Outside of his job, Gary used his artistic talents to create ornaments alongside Michele. Together they created Lindsey’s Decorations which made thousands of bread dough and clay ornaments that grace the Christmas trees of homes around St. Louis and, thanks to the Pandemic, have been sent through the mail across the United States. His creativity and attention to detail helped craft one-of-a-kind ornaments that celebrate the thing he loved most, family. Gary had many hobbies and interests, including travelling the world with Michele. He was a collector of many things and enjoyed showing his grandkids the mementos he had gathered from across the world. In his retirement, he was happy spending his time gardening with Michele, creating a backyard oasis they enjoyed together. Gary will be remembered for the love he had for others. His marriage to Michele was full of love and respect, a marriage his children admire and can only hope to live up to. His children and grandchildren were his pride and joy, and those who survive him will spend the rest of their years making sure his grandchildren know how much they were loved. Gary's ashes will be interred at Jefferson Barracks in St. Louis, Missouri with family at his side in a private ceremony on November 12, 2021. The family requests that in lieu of flowers, donations be sent to St. Jude Children's Research Hospital https://www.stjude.org/donate/donate-to-st-jude.html?sc_dcm=58700006942402311&sc_cid=kwp&sc_cat=b&ds_rl=1285465&gclid=Cj0KCQjwt-6LBhDlARIsAIPRQcJ1dZ0iZixqAaw7_aATebdbfITd5EjnbqDrOqbIMe8iPLFa2zqIRyEaAqoCEALw_wcB&gclsrc=aw.ds

Gary Lindsey passed away peacefully at home with family at his side on Tuesday, October 26, 2021. Gary is survived by his wife of 51 years Michele and his four children Jason Lindsey (Renee), Erin Morice (Mitch), Katie Castiaux (Eric) and... View Obituary & Service Information

The family of Gary Lindsey created this Life Tributes page to make it easy to share your memories.

Gary Lindsey passed away peacefully at home with family at his...

Send flowers to the Lindsey family.