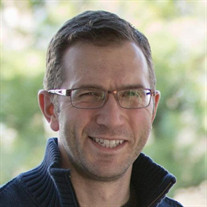 Dr. Gary Hammen, MD, PhD died unexpectedly on September 17 2021. Gary was an amazing father, husband, son, brother, doctor, scientist, and friend. Gary had many roles and in all of them brought his whole heart, which was huge. His love and now loss are felt intensely. Gary was born and raised in Fonda IA, to Jerry and Kate Hammen (now Anthofer), where he helped on the family farm from a young age. He excelled in both school and rebellion. He loved exploring and science experiments from a young age – from experimenting with baking to building to flammable objects. He loved math, dragons, his siblings, and his friends. While Gary dealt with many difficulties during his childhood, he emerged with an intense work ethic and an understanding of the complexities of love and sorrow. After graduating high school, he joined the army and became a young father. He joined the Army to “gain discipline and blow stuff up”, and his service fed his interest in people and the world, jump starting his eventual travels that included 5 of the 7 continents. After leaving the army due to a service related disability, he returned to work, college, and family life with Ashlyn and his first wife, Bridgett – eventually graduating from the University of Iowa as a member of Phi Beta Kappa academic honor society, with an honors degree in Biochemistry. Gary matriculated to Washington University as part of the Medical Scientist Training Program, earning his PhD in Neuroscience and his medical degree. There he met his wife, Alecia, and was one of the few students to raise a child throughout the duration of his training – taking his daughter Ashlyn with him to study groups and to look at slides in the lab. Gary’s research included the design and use of optical coupled planar imaging to study the secondary olfactory cortex, which resulted in several publications as well as methods advancement. He developed a close group of friends and colleagues, sharing not only science but much fun and laughter. After defending his PhD, he returned to medical school where he enjoyed clinical care, particularly the care of patients who otherwise were dismissed by the medical system. During this time Gary married his wife Alecia in 2011, with whom he had two more children, Emmett (now 5) and Vincent (now 4). Gary, whom Alecia would describe as “her person”, was a generally fun, fiery, caring and adventurous partner. From scuba diving in Australia, to hiking throughout the western US, running half marathons, exploring the California, Missouri, and Italian wine countries, they had many adventures and “so much love” as Gary would emphasize. He and Ashlyn strengthened their bond with a shared love of Dr. Who, Lord of the Rings, video games and learning about medical ailments. He taught Emmett to snorkel in Lake Michigan, hunted worms and bugs with Vincent, taught them to start a campfire, find constellations, and roar like a dragon. Even through the difficult times that come with the stress of medical training, raising young children and many life changes, Gary continued to work with dedication to be a father and partner. He loved his family with all of his heart. Unfortunately, after entering the residency training program in anesthesia, Gary’s intense care for patients labelled as difficult by the medical system, his desire to really get to know and care for the whole person, his scientific mind always pushing to understand the “how” of diagnoses and treatments was deemed to a be not a good fit for his training program. These differences in priorities, along with the program’s unwillingness to support his status as a disabled veteran with a sleep disorder and the ongoing stress of medical problems in his children resulted in him parting ways with the extended training program and moving into general practice and addiction medicine. In Gary’s practice of general and addiction medicine he found his professional calling. He eventually started his own private practice, Kirkwood Medication Assisted Treatments, and was said by many patients to be the best physician they had ever seen. He was dedicated to his patients, taking calls at all hours of the day and night, spending as much time as with them as needed, and guiding them through difficult times. He had an unending desire to help all of those he met, even sometimes at his own expense. Through all of the ups and downs of life, Gary loved fiercely, cared deeply, and remained intensely curious. His sister Kayla summarized as “He was my real life hero… [he] made me feel like I was someone … someone special”. Gary brought that gift to so many people. He will be forever treasured by not only his wife and children but his mother Kate (Danny) Anthofer – from whom he gained his perseverance, caring, and consistency, his father Jerry Hammen – from whom he inherited his fun, spontaneity, and adventurousness, his sister Sheena (David), her children Tyler and Keagan, his brother Shane (Amy) and their children Madison, Mackenzie, Aiden and Isaac, his sister Kayla (Tyler) and their son Brooks, and his youngest sister Brooke (Coty), as well as his grandfather, grandmother, 13 aunts and uncles, 29 cousins, many in-laws to whom he was a beloved member of the family, and countless friends, patients, and colleagues. He is eternally loved and he will be so missed. At this time arrangements will be kept to the immediate family, though a full memorial service will be held at a future time. In lieu of flowers please consider a donation to shatterproof.org or operationsecondchance.org.

Dr. Gary Hammen, MD, PhD died unexpectedly on September 17 2021. Gary was an amazing father, husband, son, brother, doctor, scientist, and friend. Gary had many roles and in all of them brought his whole heart, which was huge. His love and... View Obituary & Service Information

The family of Dr. Gary Hammen created this Life Tributes page to make it easy to share your memories.

Send flowers to the Hammen family.