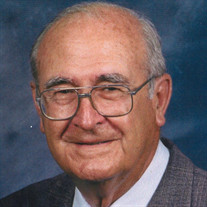 Baumhoegger, Fred, of High Ridge, Missouri, was born February 28, 1925 in St. Louis, Missouri to Frederick Sr. and Ella (nee Spitzfaden) Baumhoegger and entered into rest Sunday, November 14, 2021 in High Ridge, Missouri at the age of 96 years, 8 months, and 17 days. He is preceded in death by, his parents, two (2) siblings, Harry Baumhoegger and Russell Baumhoegger, He is survived by, loving wife, Dorothy (nee DeBacco) Baumhoegger, three (3) children, Rebecca Baumhoegger, Robert (Linda) Baumhoegger, and Frederick (Jo) Baumhoegger III, four (4) grandchildren, eight (8) great grandchildren, along with numerous extended family and friends. Fred was strong willed in everything he did. For over 60 years he was a part of the American Legions. He was also a part of the VFW in high Ridge and several Drum and Bugel Corps. He was a Boy Scout Leader and was even a Sea Scout when he was a kid. Photography played a big role in his life. He also painted amazing landscapes and just about everything in nature. His loving wife and family will miss his smile and laughter. He will be fondly remembered and dearly missed by all who knew and loved him. Visitation Wednesday, November 24, 2021 9:30 a.m. to 11:30 a.m. Service will follow then burial at Jefferson Barracks National Cementer In lieu of flowers memorial donations may be made to Wounded Warriors or St. Jude Children’s Hospital. Family and friends can review and share stories, photos and condolences online at www.stlfuneral.com and follow details of this event and others in the community at www.facebook.com/stlchapelhill.

The family of Fredrick Baumhoegger Jr. created this Life Tributes page to make it easy to share your memories.

Send flowers to the Baumhoegger family.