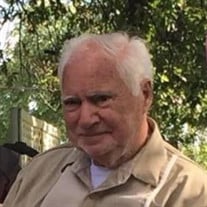 DOYLE LANCE of Iron Mountain Lake, Missouri was born July 10, 1936 in Dunklin County, Missouri to Chester and Jetta Pearl (nee Parmer) Lance and died Thursday, November 19, 2020 at Camelot Nursing and Rehab Center in Farmington, Missouri at the age of 84 years 4 months and 9 days. He is preceded in death by his parents, his son, Michael Lance, and his sister, Naomi Ruth “Sissy” Malady. He is survived by his wife of sixty-three (63) years, Martha (nee Moe) Lance of Iron Mountain Lake, Missouri (Married October 5, 1957), his daughter, Darleen (Robert) Hayworth of New Castle, Indiana, his son, James (Mona) Lance of Iron Mountain Lake, Missouri, six (6) grandchildren, Leslie, Jeremy, Ian, Shaun, Lisa (Matthew) and Joey, ten (10) great-grandchildren, Joshua, Addison, Austin, Ethan, Madison, Blake, Ryker, Aryianna, Issac and Landen, three (3) sisters, Sue Page of Kennett, Missouri, Judy Davis of Kennett, Missouri and Jan Irwin of Holcomb, Missouri, his brother-in-law, David (Michele) Moe of Punta Gorda, Florida and many other relatives and friends. Doyle and Martha met in Michigan, where each of their families where relocated for work in the 1950’s. Doyle built their first home in Royal Oaks, Michigan and worked in the auto parts trade from 1955 to 1985 before retiring to Iron Mountain Lake, Missouri, another home he built for Martha. He was endlessly active as an Alderman and Mayor for the City of Iron Mountain Lake and also served as President of the Water District in Pilot Knob, Missouri. He enjoyed working in his yard, working on his computer, bowling, traveling and camping. But perhaps more than anything, Doyle simply loved spending time with his family and found great joy in hosting his family reunions at their home in Iron Mountain Lake. He is fondly remembered and will be dearly missed by all those who knew and loved him. Private Ceremony through Chapel Hill Mortuary in Bonne Terre, Missouri followed by Entombment at St. Francois Memorial Park, 6776 Vo-Tech Road, Bonne Terre, MO 63628. A Celebration of Life will be planned at a future date where family and friends can gather and connect to reflect on and celebrate the life of Doyle Lance.

The family of Doyle Lance created this Life Tributes page to make it easy to share your memories.

Send flowers to the Lance family.