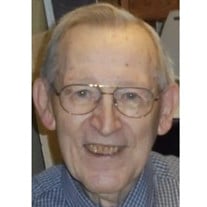 Donald J Wells, 89, longtime resident of Crestwood, Missouri, went to meet his Lord and Savior on October, 26, 2020 surrounded by his loving family at home. He is preceded in death by his beloved wife of 65 years, Glenda Bonnett Wells. He is survived by his four children: Gloria Wells Miller (Kent), Nancy Wells Henley (Danny), Steven Wells (Heather) and Teresa Wells Scott (John), 13 grandchildren and 11 great-grandchildren. Donald was a lifelong Christian who preferred to share his faith with kindness, gentleness and consistent acts of Christian love with all those who were lucky enough to encounter him. He valued his faith and expressed it with integrity and consistency. Raised in Stockport, Iowa by Esmond and Evangie Wells (deceased). Don spent his childhood on the family farm playing and working with his nine siblings, James Wells, Pauline Wells Kaplan, Esther Wells Schwerin, Marvin Wells, Charlie Wells, Henry Wells, Andy Wells, Larry Wells (all preceding him in death) and his surviving sibling, David Wells. At age 20, he volunteered to join the Air Force and served honorably for four years, remaining stateside as an aircraft electrical systems maintenance instructor and earning the rank of Master Sergeant. During those years, a pretty blue-eyed hometown girl began to write letters of encouragement to him. They were so encouraging that he took leave and came home to marry that cute letter-writing sweetheart, Glenda Bonnett. After his service, Don sought and completed a degree from Parsons College in Fairfield. He then joined the Social Security Administration and progressed there for 36 years, finishing as District Manager and working his last 26 years in St. Louis while residing in Crestwood, Missouri. In his job, he was dedicated to administering the program with efficiency and humaneness. By far, Don considered his Christian faith as the most significant guide for how he lived and served others. He attended and contributed to several churches during his life, but he spent the last 47 years enriching and giving to his church family at Crestwood Christian Church, first serving as a Deacon, then Elder and Chairman of the Board of Elders. During his time in stewardship, he proudly helped to oversee a significant building expansion and transition of leadership at the church. He always shared his deep faith with his children and grandchildren. First, by working long hours to provide for his family and enabling their pursuits, and then by encouraging togetherness through funding and planning large family gatherings once a year. Always prayerful and fun, he and Glenda made everyone feel loved, appreciated and important, providing a concrete model for a successful Christian marriage and family. He led by example and family is much richer for it. Don led a rich life of humility, faith and service. He had a quiet nature. When he spoke it was usually filled with wisdom or humor. As a result, he was beloved by many and will be dearly missed by all who were lucky enough to know him. Visitation will be held Saturday, October 31, 2020, from 11:00 a.m. until the time of the service at 2:00 p.m. at Crestwood Christian Church 11750 Eddie and Park Rd. St. Louis, Missouri 63126 followed by interment at Oak Hill Cemetery 10301 Big Bend Rd. Kirkwood, Missouri 63122. Memorial donations may be made to Crestwood Christian Church. Family and friends can review and share stories, photos and condolences online at www.stlfuneral.com and follow details of this event and others in the community at www.facebook.com/stlchapelhill.

Donald J Wells, 89, longtime resident of Crestwood, Missouri, went to meet his Lord and Savior on October, 26, 2020 surrounded by his loving family at home. He is preceded in death by his beloved wife of 65 years, Glenda Bonnett Wells. He... View Obituary & Service Information

The family of Donald J. Wells created this Life Tributes page to make it easy to share your memories.

Send flowers to the Wells family.