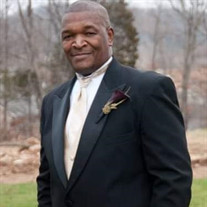 Anderson, Darryl James, of House Springs, Missouri, was born January 13, 1962 in St. Louis, Missouri to James and Dorothy Mae (nee Hayes) Anderson and entered into rest Tuesday, January 18, 2022 in House Springs, Missouri at the age of 60 years and 5 days. He is preceded in death by his parents, two (2) siblings, Deonzie Anderson & Dennis Anderson, cousin, Rodney Hayes, He is survived by his loving wife, Stephanie Ann (nee Stark) Anderson, two (2) furry friends, Karma & Ziva, one (1) daughter, Denise Anderson, one (1) brother, Daquiri (Sharica) Anderson, two (2) sisters-in-law, Alice Anderson & Diane (Brian) Larry, one (1) sister-in-law, Debbie Stark, three (3) brothers-in-law, Richard (Stephanie) Stark Jr., Ryan (Ashley) Stark, & Robert (Jennifer) Stark, in laws, Richard & Karen (nee Fuchs) Stark, numerous dearly loved nieces & nephews, along with extended family and friends. “There are no words” A quote that seems so inadequate but also so true. There are no words to describe the grief. There are no words to understand “why”. Above all, there are no words to describe how great of a man Darryl was. But let’s try… Darryl was the best example of being humble and kind and was rarely ever angry. He could always see bright side of a situation or the bright side of people. Darryl went out of his way to be kind to everyone, even if they didn’t deserve it. He loved people and gave back as often as he could. Darryl’s friends list was constantly growing because if you met him, you genuinely liked him. The number of times his family has heard “I like that guy” after just one interaction is uncountable. He was an avid pool player from the age of 17 where he found friendship and lots of laughter. In high school he played basketball and even after high school his love for the game persisted. In the kitchen he could make anything he wanted and always made sure it was made with love. Darryl was an awesome husband, brother, son-in-law, brother-in-law, uncle, and friend. He would always make time to play games or sports with all of his nieces and nephews. They adored their Uncle Darryl because he was fun and kind to them. Darryl was a great colleague to work beside and an amazing friend. He was a life full of laughter, joy and positivity. He was one of the best at speaking God and truth into situations. He always gave back to the community and those in need and did it with a God like mind and heart. He will be fondly remembered and dearly missed by all who knew and loved him. In honor of Darryl’s kindness, memorial donations can be made to New Life Evangelistic Center at 2428 Woodson Rd, Overland, MO 63114. Visitation will be held on Tuesday, January 25, 2022, from 4:00 p.m. until 8:00 p.m. Service at Wednesday, January 26, 2022 10:00 a.m. at Chapel Hill Mortuary. 6300 Hwy 30, Cedar Hill, MO, 63016. Followed by internment at Chapel Hill Memorial Gardens. Family and friends can review and share stories, photos and condolences online at www.stlfuneral.com and follow details of this event and others in the community at www.facebook.com/stlchapelhill.

The family of Darryl Anderson created this Life Tributes page to make it easy to share your memories.

Send flowers to the Anderson family.