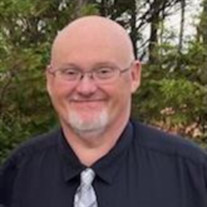 Darren Keith Wisor, 54, of House Springs, MO, passed away Wednesday, February 2, 2022. He was born September 19, 1967, in St. Louis, MO. Darren loved his wife of 28 years, Kathy Ward Wisor, was proud of his son, Brendan, and enjoyed the company of his beloved German Shepherd, Daizee. Everyone who met Darren knew he loved his Lord; he served as the minister for the House Springs Church of Christ, and his church family meant so much to him. He was also a substitute teacher for Northwest School District and the Christian Academy of Greater St. Louis. Over his years at the Academy, Darren was a mentor and friend to many students in his various roles as teacher, coach, and athletic director. He was also a long-time coach of numerous baseball and soccer teams over the years. Retiring from coaching last summer after coaching The Pirates little league team in St Peters. Besides his wife and son, Darren is survived by his parents, Rodney and LaVerne (Stoops) Wisor, his sister, Kimberly Hendon (Brian), several nieces and nephews who adored him, many cousins, other family members, and dear friends. He was a mentor, math teacher, counselor, and utmost, an instant, caring friend to all he met. He preached God’s Word by example until the very end. Darren was also an avid collector of all things Batman. Visitation will be held for family and friends Tuesday, February 8, 2022 from 3:00 p.m. to 8:00 p.m. Service will be Wednesday, February 9, 2022 at Church of Christ in Arnold 2267 Scott Dr, Arnold, MO 63010 at 11:00 a.m. followed by interment at Chapel Hill Memorial Gardens. The family requests donations be made in his memory to the Christian Academy of Greater St. Louis, 11050 N. Warson Road, St. Louis, MO, 63114, (314) 429-7070 or cagsl.net.

The family of Darren Keith Wisor created this Life Tributes page to make it easy to share your memories.

Send flowers to the Wisor family.