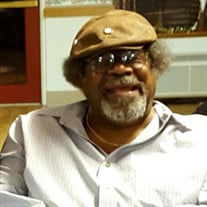 Clarence Rodman West was born in St. Louis, Missouri on August 30, 1947, to the late John Henry Jacobs and Delorse Loraine Johnson Drayton. He was the second eldest of five children. Clarence accepted Christ at an early age and always had faith in a higher power. Clarence was called home after a long illness on Wednesday, January 12, 2022. He is survived by one son, Clarence Rodman West, Jr. of Los Angeles, California. Left to cherish his memories are one sister; Marilyn Kelley of Kirkwood, Missouri; and two brothers; Edward (Jerealine) West, and Elmer “Terrell” (Carolyn) Drayton both of O’Fallon, Missouri; as well as many nieces, nephews, family and friends. Clarence “Buddy” West was affectionately known as Uncle. He will be dearly missed by three very dedicated and faithful people: Graylyn Kelley, nephew; Cynthia Booth, cousin; and a very special friend, Renee Hill. After completing his education in the Kirkwood School District, Clarence enlisted in the United States Navy in 1965. He diligently served his country and retired with an honorable discharge. Clarence Rodman West, we salute you!! He loved having friends over for bar-b-ques, sibling and extended family dinners, sitting around and shooting the breeze, playing cards, dominoes, or casually relaxing while listening to those down-home blues. If he wasn’t on his way out of town on a quick getaway or impromptu road trip, you might just find him in town driving around in his Lincoln Town Car. Buddy was either out and about, on the move, or merely at home waiting to entertain. It didn’t matter to him as long as he was around people. Buddy loved his family. He stood for family and friends. Yes, Buddy was everyone’s buddy and as such, remained open for that good old fashioned (no texting) conversation; face-to-face dialogue, or simple chit-chat or two on any topic -- at any time -- at any place. Yaassss, he was always up for a debate 🤔 … that was just Uncle.

Clarence Rodman West was born in St. Louis, Missouri on August 30, 1947, to the late John Henry Jacobs and Delorse Loraine Johnson Drayton. He was the second eldest of five children. Clarence accepted Christ at an early age and always had... View Obituary & Service Information

The family of Clarence " Buddy" West created this Life Tributes page to make it easy to share your memories.

Send flowers to the West family.