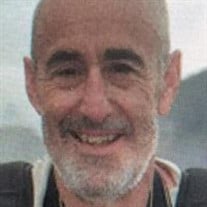 Williams, Bruce Allen. Bruce Williams, 74, passed away peacefully on Saturday, Dec. 26, 2020, with his beloved wife Trish by his side, as she has been for 52 years. Bruce also leaves behind his dearly loved daughter Katie (Jason) Graham and his adored grandchildren Hunter and Madison. Throughout his lifetime, Bruce relished a good challenge and excelled at sailing, cycling, running, competing in triathlons, scuba diving and whitewater rafting. This love of a challenge was most notable in his last years in his approach to his Alzheimer’s Disease. When he was first diagnosed 13 years ago, his response was “It is what it is; let’s live!” And so for the next 10 years, he and Trish traveled the world on active, adventure tours, many of which included their tandem bicycle. Bruce was born in Brooklyn, New York, and grew up in Sacramento, California. While attending the University of California Davis, he met Trish, and after graduating, they married in July, 1968. Their honeymoon was a three-day drive to Chicago, Illinois, where they began their married adventure, eventually settling in St. Louis, Missouri. Bruce retired in 2001 as major accounts manager for Continental Can Company (Crown, Cork & Seal). Bruce shared his “time, talent and treasure” with organizations that aligned with his strong sense of social justice. Organizations that benefited from his leadership include the Alzheimer’s Association, Eliot Unitarian Chapel, Room at the Inn, and KWMU. Bruce, along with Trish, were active in the Association for Couples in Marriage Enrichment, where they served in many capacities, both locally and nationally. In his desire to be of service to others, he participated in clinical trials for Alzheimers’ research. He will be remembered by friends across the country who were drawn to his warm personality and the way he grabbed life and lived every moment to the fullest. Bruce was kind, fun loving, adventurous and generous. He loved music — folk, symphony, and jazz — and built stereo systems to play it, as well as attended live concerts. And he loved to dance. He was a gracious and welcoming host, enjoying entertaining and sharing his home with friends, old and new. He will be missed by so many. Bruce’s last years were enriched by the care and support from Senior Home Care, Serenity Adult Day Care and staff at Clermont home of Dolan Memory Care Homes. Contributions in Bruce’s memory may be made to St. Louis Public Radio, Nine Network or Charles F. and Joanne Knight Alzheimer’s Disease Research Center at Washington University. When we can gather together, we will have a memorial service and a celebration of Bruce’s life well lived.

Williams, Bruce Allen. Bruce Williams, 74, passed away peacefully on Saturday, Dec. 26, 2020, with his beloved wife Trish by his side, as she has been for 52 years. Bruce also leaves behind his dearly loved daughter Katie (Jason) Graham and... View Obituary & Service Information

The family of Bruce Allen Williams created this Life Tributes page to make it easy to share your memories.

Send flowers to the Williams family.