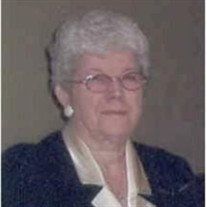 Not sure what to send?

Betty Lou Nix (Perrine), 88, of Royalton, IL, passed away at her home in St. Louis, MO on May 9, 2022. She was born on December 10, 1933 to Kermit and Margaret (MacKenzie) Perrin in Royalton, IL. She is survived by two daughters and two sons, Terri Webb of St. Louis, MO, Patricia Nix of St. Louis, MO, Kevin Nix and his wife Maria of Royalton, IL, and Darren Nix of St. Louis, MO; three grandchildren, Tasha Perry and husband Casey of Ludowici, GA, Andrew Webb of Royalton, IL, and Van Nix of Royalton, IL; one great grandson Benjamin Nix of Ludowici, GA; one sister Karen Imhoff of Royalton, IL; and one sister-in-law Vivian Hodgeman of Royalton, IL; and her wonderful nieces and nephews. She was preceded in death by her parents, ex-husband Bennie, and her son Jeffrey Nix. Betty lived and traveled the world with Bennie. She loved to tell stories about her time living in Germany, Taiwan and Italy, but her heart always belonged to Royalton. She worked on different committees in Royalton and loved dedicating her time to different projects around Royalton. She loved being a member of Beta Sigma Phi and enjoyed spending time with her sorority sisters. She started at Southern Illinois University in 1978 and was there until her retirement in 2004. During her time there she was Nominated for Southern Illinois Women of the Year. During her free time she loved to do crafts and attend craft shows with her sister Karen. Betty had so many friends and family that loved her and will be missed terribly. In lieu of a funeral there will a celebration of life held at the Royalton Catholic Hall 212 S. Pecan St. Royalton, IL 62983 on June 25, 2022 at 2 pm. Donations can be made to the Royalton public library 305 S. Dean Royalton, IL 62983 or the Miners cemetery 211 S. Meadow St. Royalton, IL 62983.

Betty Lou Nix (Perrine), 88, of Royalton, IL, passed away at her home in St. Louis, MO on May 9, 2022. She was born on December 10, 1933 to Kermit and Margaret (MacKenzie) Perrin in Royalton, IL. She is survived by two daughters and two sons,... View Obituary & Service Information

The family of Betty Lou Nix created this Life Tributes page to make it easy to share your memories.