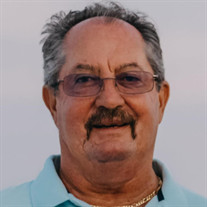 Eimer, III., August John, of Cedar Hill, Missouri, was born April 24, 1949 in Saint Louis, Missouri to August and Rosemary “Cookie” (nee Schuler) Eimer, Jr., and entered into rest Saturday, April 24, 2021 in Cedar Hill, Missouri at the age of 72 years. He is survived by, his wife, Cathy (nee Hussey) Eimer of 49 years. Married on April 15, 1972 in Warwick, Rhode Island, three (3) children, August John (Tonya) Eimer IV, Shelly Ann (David) Nadler and April Dawn (Ronnie Jr.) Day, eight (8) grandchildren, Irieal, Sara, August V, Ronnie III, Grace, Allison, Riley and Abbie, nine (9) siblings, Maryclare (Bob) Stephens, Donna Villani, Bill (Peggy) Eimer, Jim (Sherrie) Eimer, Diane (George) Hotard, Karen (Tom) Toti, Vickie (Henry) Pattrin, Connie (Ken) Voss and Joe (Liz) Eimer, one (1) sister-in-law, Shirley Bush, one (1) brother-in-law, Jack Hussey, along with numerous extended family and friends. He is preceded in death by, his parents, one brother-in-law, Ron Villani and one sister-in-law, Shirley Hussey. John was a United States Navy Veteran. He retired from Ameren Missouri in 2012 after 30 years of service as an electrical supervisor. John would call himself a snowbird, as he would travel south to Florida in the winter, where he liked to spend time on his boat. After retirement every day was Saturday and if you asked him if he needed anything his response was always, “a 7-inch stack of 100’s”. He will be fondly remembered and dearly missed by all who knew and loved him. Visitation will be held Sunday, May 2, 2021 4:00 p.m. until 8:00 p.m. at CHAPEL HILL MORTUARY, 6300 Hwy 30, Cedar Hill, Missouri 63016. Funeral Mass Monday, May 3, 2021 9:30 a.m. at OUR LADY QUEEN OF PEACE, 4696 Notre Dame Lane, House Springs, Missouri 63051 with a PRIVATE Interment to follow at Jefferson Barracks National Cemetery in St. Louis, Missouri. In lieu of flowers, memorial donations may be made to the Melanoma Research Alliance, https://give.curemelanoma.org or the Missouri Department of Conservation, P.O. Box 180, Jefferson City, Missouri 65102. Family requests everyone wear their favorite Cardinal/Red apparel. Family and friends can review and share stories, photos and condolences online at www.stlfuneral.com and follow details of this event and others in the community at www.facebook.com/stlchapelhill.