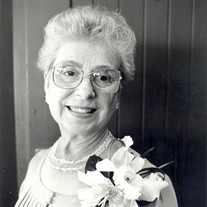 Alice Josephine Marshall, age 101, passed away on Saturday, September 4, 2021. Born November 26, 1919 in Kirkwood, MO, she was the first child of George and Pauline (nee Schmitz) Kuhn. The family moved to Troy, MO in 1928 and Alice graduated from Buchanan High School there in 1937. She then moved back to Kirkwood to attend Rubicam Business School, after which she went to work at Barnes Hospital in 1939. She married Allen (“Barney”) Marshall in 1948. The couple had four children. Barney died in 1971. Alice worked at Barnes Hospital for 48 years, most of the time as the secretary to the hospital director. She retired in 1986. From 1952, until shortly before her death, Alice resided at the home in Kirkwood that her father had built in 1939. Her interests included reading, golf (which she took up later in life), genealogy, traveling, listening to Bott Radio Network Bible teachers, and, of course, spending time with family and friends, which included weekly “Cousins’ Breakfasts.” Alice always believed that she had received much more in life than she deserved. She became a Christian in the early 2000s, and was baptized in 2006. She is survived by her four children, John (Carolyn) Marshall of Columbia, MO, Steve Marshall of Batchtown, IL, Kathy Sherrick of Kirkwood, MO, and Patty (Sam) Thompson of Fenton, MO; grandchildren Erika Marshall (Becky), Andrew (Esther) Marshall, Allison Marshall, Lucy (Dave) Conklin, John Thompson, and Christine Thompson; and great-grandchildren Margot Alice Swanson-Marshall and Bella Thompson. She was preceded in death by her parents, her husband, and her siblings Florence Malaney, Vera Mae Kuhn, George Kuhn Jr, and Betty Hilbrant. Visitation will take place at Chapel Hill Mortuary in Kirkwood (10301 Big Bend Rd) on Friday, September 24 from 4 to 7 pm. A memorial service will be held at Faith Des Peres Presbyterian Church in Frontenac (11155 Clayton Rd) on Saturday, September 25 at 11:00 am. Masks will be required for these events. In lieu of flowers, memorials may be made to the St. Louis Food Bank or to the Salvation Army.

Alice Josephine Marshall, age 101, passed away on Saturday, September 4, 2021. Born November 26, 1919 in Kirkwood, MO, she was the first child of George and Pauline (nee Schmitz) Kuhn. The family moved to Troy, MO in 1928 and Alice graduated... View Obituary & Service Information

The family of Alice Josephine Marshall created this Life Tributes page to make it easy to share your memories.

Send flowers to the Marshall family.